Upsizing on the Upswing: The Big Decision More Homeowners are Making

Upsizing on the Upswing: The Big Decision More Homeowners are Making

Downsizing? That’s so 2016. Housing trends and consumer research indicate a move toward upsizing as homeowners transition to larger dwellings.

For Rhiannon Kruse, moving to a bigger home was about facing the music.

For five years, Kruse and her husband had squeezed themselves into a downtown Seattle high-rise. At 700 square feet, their home meant giving up a dresser to cram clothing into an under-the-bed storage space, and limiting the number of guests they could invite over for dinner. Even Kruse’s parents had to stay in a hotel after making the six-hour drive from Oregon to visit; there just wasn’t enough space for overnight guests.

But for the duo, both professional entertainers, the final straw may have been the makeshift recording studio they crammed into a tiny desk space, wedged between the bed and the window. It just wasn’t practical for a couple that make their living as piano players, Kruse says.

“We had a keyboard setup and a desk and recording equipment. To play, we had to wear headphones because we were in a shared space,” Kruse says. “We definitely maximized the space, but everything had to have a purpose.”

So when Kruse’s husband broached the idea of moving into a much larger house just outside the city limits, it took a little bit of convincing — but not much. The couple fell in love with a 2,700-square-foot new construction home about 15 miles north of the heart of the city.

They also fell in love with the idea of having a place to put a piano — an actualpiano.

“My grandmother had given us her grand piano. It was sitting in a storage place for two years,” Kruse says. “[Now] I play a lot more at home. Probably five times as much — and when I do, it’s relaxing. I don’t feel suffocated.” 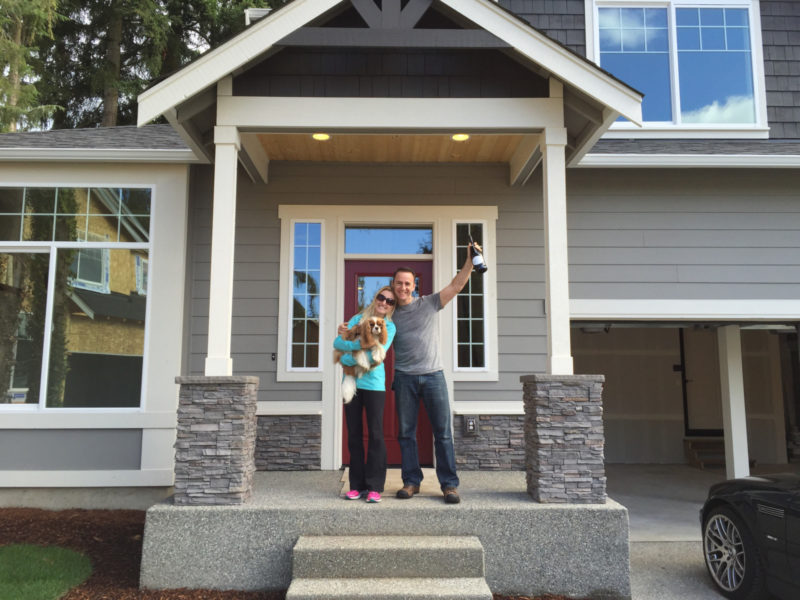 Rhiannon Kruse and Jeff Coleron in front of their home on the day they moved in. Photo courtesy Rhiannon Kruse.

The couple’s story may not seem like much of an anomaly these days. They’re part of an uptick in upsizing: More homeowners are opting for a bigger home and larger price tag, skipping the traditional starter home altogether. Millennials are especially part of this movement, according to Zillow research.

What’s more? A new analysis of census data shows that the median square footage of new homes is up 20 percent since 2000, from about 2,000 square feet to about 2,500 square feet.

The data corresponds with what sociologists are seeing firsthand, says Brian Miller, an associate professor of sociology at Wheaton College, just outside Chicago. Miller, who studies cities, suburban migration and culture, argues that several factors could be impacting the shift in housing trends, including the strength of the national economy.

“I see a lot about tiny houses and micro apartments in Seattle, San Francisco, and New York — these cities who are really grappling with housing issues and trying to fast-track 200- or 400-square-foot apartments,” Miller says. “And yet the overall pattern across America is that people want these larger houses.

“The economy has gotten better over the last few years,” he continues, with a nod to cities like Dallas, one of the hottest housing markets in the country. “It seems it’s enabled people to [buy large houses] again.”

Popular culture may be influencing this decision as well, Miller adds, pointing to how homes are depicted on television, in both the reality and scripted genres.

“The typical home on TV is huge. Think about the ‘Friends’ apartments, which were impossibly large,” he says. “I’m thinking of HGTV shows I’ve seen over the past few years, where the dining room seats 10 or 12. I don’t have those parties, but if you’re watching HGTV, it just seems like everything is huge.” 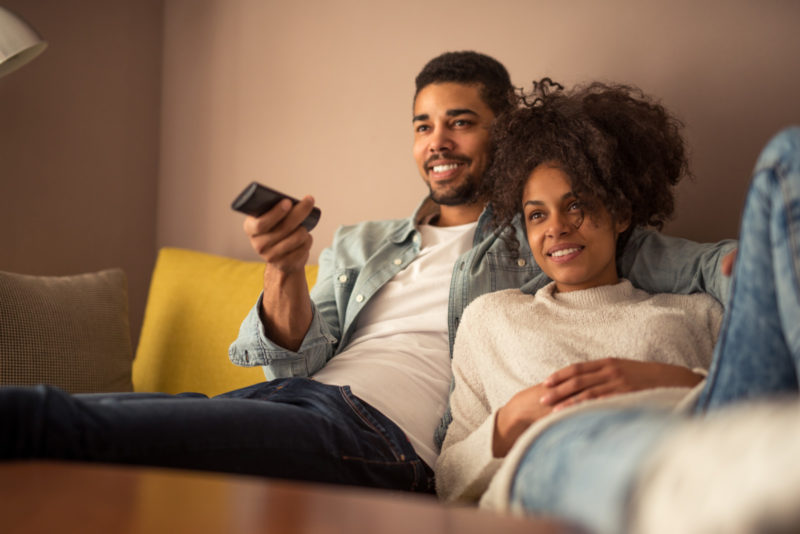 The abundance of larger homes in popular entertainment isn’t by accident. Home design shows are rooting their programming in extensive research, says Julie Link, director of research and consumer insights for Scripps Networks, which owns HGTV, the Food Network, and others. The company recently conducted an in-depth, comprehensive study they called Dynamics Shaping the Future of Home.

The study’s goal was to better understand what is going on in the lives and in the homes of Scripps Networks’ audience in order to cater programming to them. The network asked consumers to complete video journals, diary entries, collages, and even Pinterest boards.

“We don’t want to be showing million-dollar homes when we’re in a recession,” Link adds. “We want to be reflective of what’s going on in the homes of our viewers.”

The results? Both surprising — and not. Younger consumers (adults between 25 and 39 years old) are beginning to prioritize space, the study found. Fifty-six percent of millennials said that having a large home is important to them, compared with 42 percent of Gen Xers and just 35 percent of baby boomers. 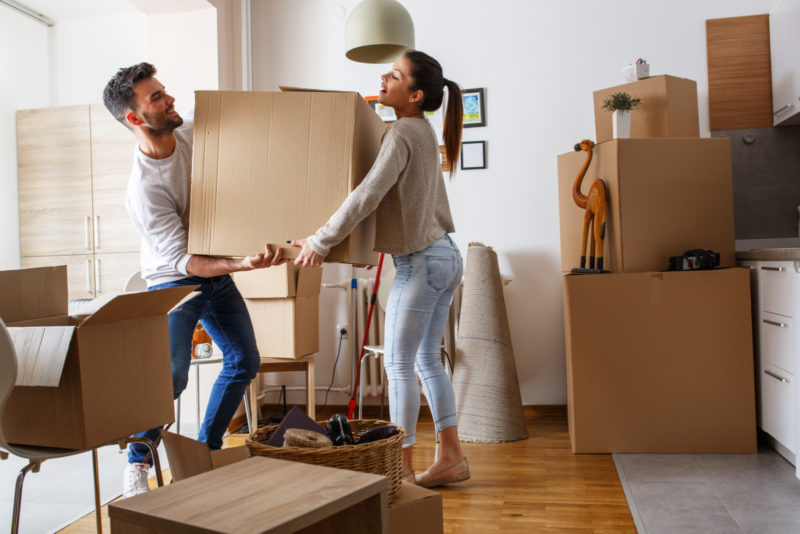 As millennials move into larger homes, they often delay buying new furniture and decorative pieces until they find just the right item.

Once young homeowners find the perfect space, many are biding their time until they find items that are multi-functional and carry meaning, Link continued. They might wait to fill an empty wall until, say, they can frame Instagram photos from a favorite trip, or afford to purchase a high-tech yoga mat that can also double as an elegant carpet.

“Millennials want a story behind [what they buy]. They’re doing this to create a sanctuary,” Link explains. “The world is a chaotic place right now, no matter what your views on politics are. [Millennials] really look inward, and they want to control something. The easiest thing for them to control is their home.”

Add that focus on intentional buying to the shift in how homes are designed, with a nod to larger, open spaces. Gone are the days of rigid, closed-off eating spaces or television rooms. In their place are open floor plans and shared spaces, says Mary Dignan Hill, a real estate agent with John Aaroe Group in Southern California.

Dignan Hill, who has worked in real estate for a decade, recently noticed more clients seeking out open floor concepts or renovating older homes to take down walls to create larger, open spaces.

“People want to be able to be in their kitchen and cook, but also be with their family,” she notes. “Where you used to have a separate kitchen, a separate dining room and a separate television room, it’s all becoming one big space.” 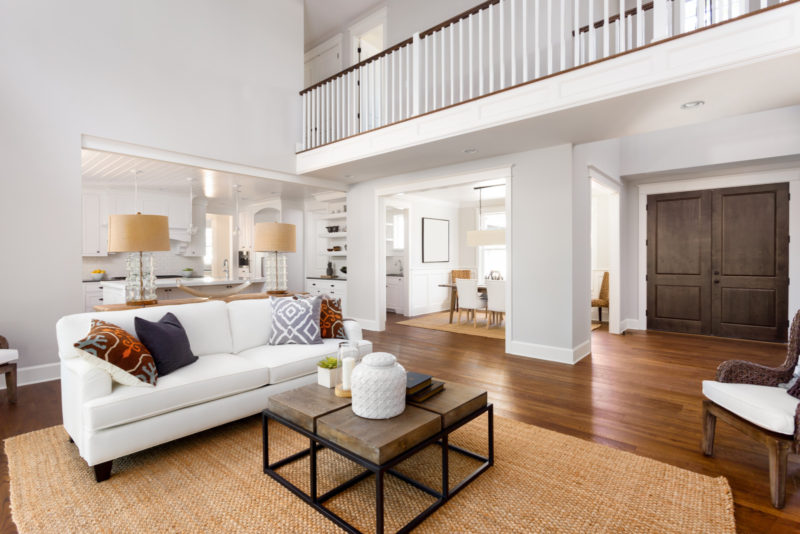 Two years after upsizing from 700 square feet into her 4-bedroom, 3-bathroom home, space is still a novel idea to Kruse — and one she doesn’t take for granted.

“Now that I have the extra space, I understand it. I understand why people want to do it,” she says. “I really don’t miss living in the condo, and I thought I would.”

She mentions the give-and-take of their old, cramped quarters: How, when she lived in the small condo, if she bought a shirt, she’d have to get rid of an old one. A new pair of shoes meant donating a worn-out pair to charity. It was a dance of space.

“I had felt so tense living downtown,” Kruse recalls. “When we finally got to space and we could stretch and everything — a lot of that tension was alleviated.”